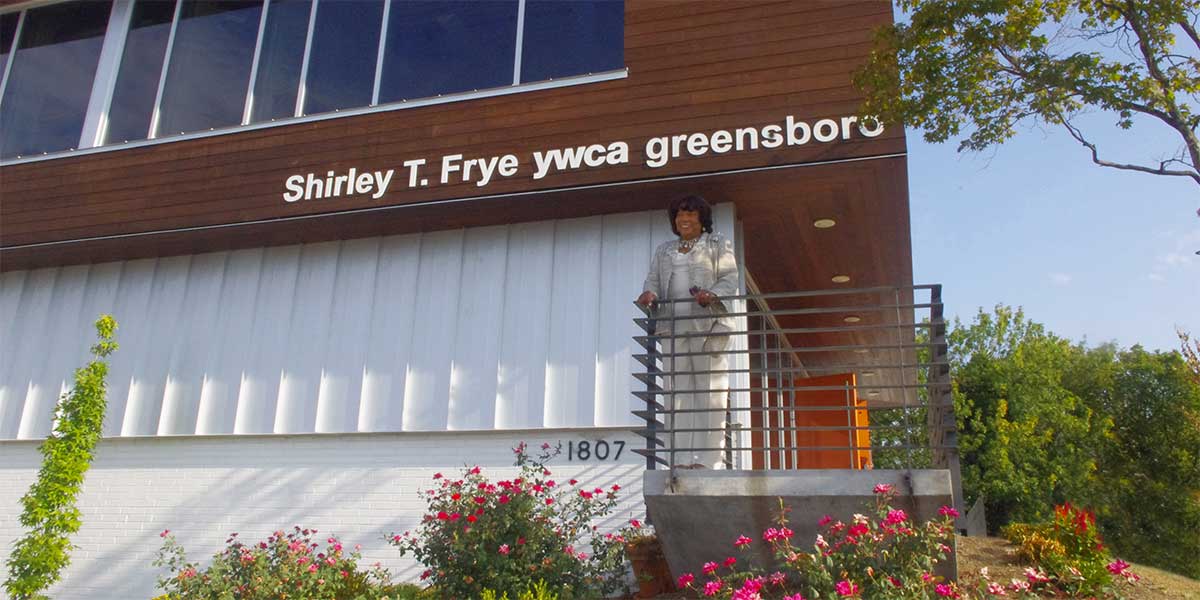 On Sept. 15, 2016, amid board and campaign leaders, staff, friends and supporters, the YWCA Greensboro officially unveiled the name on its newly renovated building on 1807 E. Wendover Avenue: Shirley T. Frye YWCA Greensboro. The building name honors longtime YWCA and community leader Shirley Frye. The event, whose guests included Shirley Frye and her husband, Henry, also celebrated reaching the YWCA’s benchmark goal of $4 million toward its $5 million campaign. The Shirley T. Frye YWCA building was purchased and renovated as part of the Courage and Commitment campaign still in progress.

Shirley was visibly moved by the prominent name on the building. “I never expected anything like this,” she said. “When I was president of the YWCA so many years ago, I just did it because it needed to be done. There have been a lot of very good women leaders who have come out of this program. I am honored beyond words.”

The YWCA Board of Directors made a unanimous decision to honor Shirley Frye with the permanent naming of the building because of her extraordinary service and leadership through the years, including YWCA Greensboro and YWCA USA.

Courage and Commitment Campaign Co-Chair Anne Hummel said that unveiling the Shirley Frye name on the same day they announced an unprecedented $4 million raised toward their $5 million goal was very fitting. “We are here today changing all these lives,” she said, “because of the tireless, committed leadership of Shirley Frye and so many others who came before us. That is why I and the other campaign leaders have committed our energies toward this $5 million goal. It is a gift to young women today and to those who will serve in the future.” Hummel added that they still have $1 million yet to raise, and hope to celebrate a successful campaign at the first of the year.

“What has happened in this community through the YWCA under the leadership of women like Shirley Frye and Anne Hummel – and hundreds of women like them who have given their energy, time, commitment and resources – is no small thing,” said Lindy Garnette, CEO of the YWCA Greensboro. “We literally cannot measure the impact this has had and will have on thousands of girls, women and families. Countless leaders, students, CEOs, mothers, and productive citizens have grown from these programs and shaped this community and the world around them. Shirley T. Frye is not just a name on our building—it is inspiration and a voice. And this Courage and Commitment campaign is not just about money—it is hope and our future.”

YWCA programs including Passion to Purse, Teen Parent Mentor Program, Healthy Beginnings, YWORLD Youth Program, Partners for Healthy Youth, and an Emergency Family Shelter respond to the daily needs of our community and carry on the vision of those who have supported this YWCA for more than 113 years.

The YWCA Board of Directors and Campaign Leaders will begin hosting informational and celebratory luncheons for those wishing to tour the Shirley T. Frye YWCA at 1807 E. Wendover. These occasions will celebrate our success and provide information on learn how to be a part of this exciting organization. Luncheons will begin at 12 noon on Thursday Sept. 29 and Thursday October 13. Call (336) 273-3461 for questions or to RSVP, or to learn more about giving to the YWCA.