Honoring Leaders in Our Triad Community

Honoring Leaders in Our Triad Community

“We have lost three trailblazers and public servants,” Greensboro City Council member Jamal Fox wrote when he learned of the passing of three community activists in the Triad.

Rep. Johnson was first elected to the House in 2014, filling the seat left open when Alma Adams ran for Congress. He was a respected member of the House, working tirelessly on behalf of school employees and advocating for a true democratic process,” recalled a fellow representative.

Rep. Johnson was known for submitting many bills, wasting no time to speak out against injustices. Among his many causes he championed raising the minimum wage, expanding Medicaid, protecting domestic violence victims, and requiring body cameras for police officers.”

U.S. Congresswoman Alma Adams had this to say about Rep. Johnson, “He loved his community and fought for them every step of the way, which is why I was proud to see him take the reins to serve North Carolina’s 58th House District,” she said in a news release. “Ralph was truly a servant leader who stayed involved and committed to the least of these.”

Earline Parmon, Forsyth County’s first black state senator, also died March 15, 2016. Ms. Parmon, a Democrat, served for 12 years on the Forsyth County Board of Commissioners. She was elected to the North Carolina Senate in 2012 after serving as an N.C. House representative for 10 years.

Here is what Ms. Parmon wrote when entered the race for the State Senate: I have represented Winston Salem’s 72nd District in the North Carolina General Assembly since 2003. It is humbling and an honor for me to represent the people who reside in Winston-Salem and the great state of North Carolina, and I look forward to continuing the fight for issues that are important to you! As your next NC Senator, representing District 32, I intend to take strong stands on important issues — education, affordable health care, jobs with a living wage, women’s rights, protecting our seniors, mental health reform and small business initiatives are all very important to me — because I clearly understand how important they are to my constituents.

Darryl Hunt died on March 13, 2016. This quiet man from Winston-Salem, lived two lives as an adult – one as a wrongfully convicted prisoner for 19 and one half years and then as a passionate advocate for the wrongfully imprisoned. DNA and other evidence exonerated him in the 1984 death of young white woman. Mr. Hunt became the focal point of important discussions of race relations in Winston-Salem and the Triad.

After his release from prison, Mr. Hunt became a Muslim and involved in the Innocence Project. This project is devoted to “educating the public about flaws in the criminal justice system, advocating for those wrongfully incarcerated as a result of those flaws, and providing resources and support for those trying to rebuild their lives.”

These were three leaders who made a difference in the lives of people who had little or no voice in their communities. The impact of their absences will be felt. The legacy of their lives will be realized by all those dedicated to carrying on their good and selfless work.

YWCA Greensboro invites you to attend the Stand Against Racism Day
on Friday, April 29 here at the YWCA.
Among the activities that day will be a Human Chain formed
on both sides of East Wendover Avenue. Anyone can participate.
Contact: mwessling@ywcagso.nc to register! 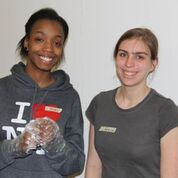 The YWCA Greensboro Family Shelter accepts donations gladly and readily. If you are interested in donating items, may we suggest you consider these items for March:

Visit the Family Shelter page for more items you can donate. Thanks!

Healthy Beginnings in our Community
October 18, 2017